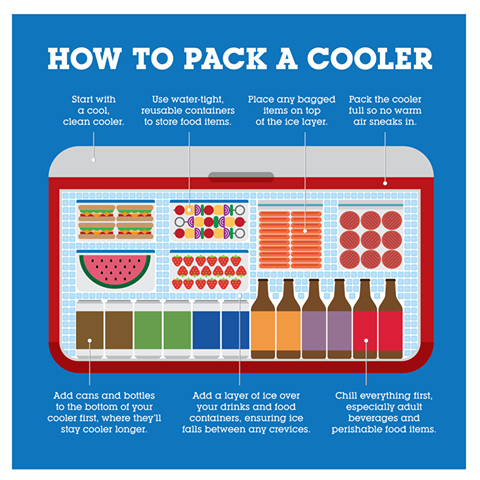 Start with the Perfect Cooler

There is not one right answer regarding the perfect cooler for your particular family travels. If the purpose of the cooler is to make snacks and sandwiches handy during the ride, go for a soft cooler that's big enough to handle the job. That way, you can easily slide it right behind a front seat for grabbing on the go.

Just be sure you test any soft cooler before your trip. Sometimes, they can leak. A good way to test is to lay down a towel (perhaps outside), put the cooler on top, and then pour in some water. Wait a few hours, then go out to see if the towel is wet. Also keep in mind that even a watertight cooler will probably leak if it topples on its side.

If you will be using the cooler heavily at your destination and will store it somewhere large like the trunk, go for a rugged cooler. You might even consider getting a cooler with wheels for beach visits or camping.

The Right Ice for the Cooler

This seems like something that should be so simple, right? Why not just go to your nearest convenience store, buy a bag, and pour it in. Well, unless you like leaks and soggy food, consider other options.

One nice choice is to get flexible ice packs. You can find some that are large and feature ice in a grid line. Place one on the bottom, put your food and …

As with vegan cookery, I find raw food and living food preparation fascinating. Not only can eating only raw food be healthy, it can be an adventure in taste and texture. I am not a full time vegan or raw foodist, let alone vegetarian, but I do appreciate those who are and enjoy cooking for them when I get the chance, and enjoy vegan and raw food dishes in my own diet. So the recipes below are from the point of view of someone who is not a hard-line raw food practitioner, but created with care and regard for those who are. Most of all, the recipes below taste good, and as we are in the thick of summer, they utilize the freshest and most in season ingredients around. Enjoy!

Nothing is more summery to me than a cold soup that features ripe, beautiful market-fresh tomatoes. The cucumber and parsley in this lovely soup add freshness while the cayenne and garlic add zip. Adding a little olive oil does wonders by adding a richness and velvety mouthfeel.

I like to peel the tomatoes first by dropping them into boiling water, …

While living on the west coast of Canada in Vancouver, I had access to the best in Cantonese cooking-restaurants, cuisine expos, cooking classes. Chinese food recipes were commonplace in the Food section of local newspapers. Each time I visit the Vancouver area, a must is my favorite Chinese café in Richmond, B.C.-Danny's Wuntun-for their, you guessed it, Wonton Soup.

It is difficult to find good Chinese food recipes because it seems that often a crucial ingredient is omitted! The Chinese food recipe for Wonton Soup shared below is a result of much trial and error on the chef's part until perfection was finally achieved.

In a large bowl, combine the first 13 ingredients and mix well with a fork.
Place one wonton wrapper in the palm of your hand, wet corners with pastry brush;
Spoon 1/3 teaspoon of meat mixture onto the middle of the wrapper, close to the top corner;
Roll and tuck …

Are you looking for equipment for upgrading your catering services by enhancing the attributes of hygiene and maintaining your reputation? If that’s what you are planning on doing, then this is the article for you. Now most chefs and even homemakers maintaining kitchens at homes have a clear idea in their head as to how their kitchen should look like. But renovating it or building it up from scratch is quite strenuous. Life, however, is not always fair and hence we need to make do with whatever we have in hand. Take a look below to maximise your existing space and make the renovation cost-effective.

1. Suitability of your equipment:

Characteristics of commercial equipment and household kitchen equipment vary widely.
Not only will the appliances like microwaves designed for homes like be won’t be of much good to keep up with the daily requirements of professional kitchens, but also, warranties for the equipment that are designed for domestic purposes when used for commercial purposes won’t be honoured by most manufacturers and understandably so since they are not the ones for the purpose. So the first and foremost and a rather important point would be to choose the correct category of utensils, keeping in mind the required size, quality, and other perspectives.

2. The energy efficiency of the purchased equipment:

Restaurant kitchens consume the most energy compared to any other commercial space. Hence, using energy-efficient appliances won’t be a bad idea as …

10. Healthy Tipping Point
Caitlin went from being an overweight, sedentary college student to a fit marathoner and triathelete. The entire journey is chronicled in her blog, Healthy Tipping Point. Follow Caitlin as she trains for a 100-mile bike race in California and gets ready to publish her first book.

What good would a Super Bowl party be without some appetizing snacks? If you're hosting your own party this year, you may feel under the gun to produce a spread of food that will appeal to everyone's tastes. Keeping the dishes simple and relatively unhealthy are usually key factors to satisfy everyone's hunger and leave them wanting more. Use the following Super Bowl party recipes to entertain your guests and turn your party into an event that no one will ever forget:

Directions: Begin by finely chopping the green onions. Next, combine the cream cheese, horseradish, and green onions in a large bowl and mix. Take individual ham slices and spread the mixture on each slice. Finally, roll the ham slices up and put them in the refrigerator. To make serving the roll-ups easier, you can consider cutting each slice in half. This will also make it seem like you have made double the amount of roll-ups.

1 cream cheese package (8 oz) – make sure it is softened

Directions: Combine the cream cheese and sour cream in a bowl and mix them thoroughly. You can also add salt and pepper to your …

By now you've got the house cleaned, the food and drinks chilling, and chips and dips ready. What else can you serve your football buddies and their families on Superbowl Sunday? Here are a few easy recipes you can prepare the night before or on the day of the game.

Chips and Salsa – click on the links for quick and easy tortilla chips and super easy tomato salsa . It's best to make both the day before and let the salsa sit in the refrigerator for a half-hour or so; double and triple the recipes to feed large groups.

These are awesome tasting and simple recipes, even your kids could make help you make them.

1 can corn – drained
1 can black beans – drain and rinsed
1 can spicy diced tomatoes, with bell peppers and spices (optional – Rotel is great)
1 can diced tomatoes (if you omit the spicy tomatoes, make this with 2 cans of diced tomatoes)
1 small diced sweet onion
1 bunch of fresh cilantro – chopped fine
1 fresh lime or lime juice in the fake plastic lime container (to taste)
Kosher salt (to taste)

Open the cans, rinse and drain as described above, mix it all together and refrigerate until it is cold and flavors blend together – about a half-hour minimum.

Serve with chips, eat alone, or use it as a topping or side with chicken, fish, or … 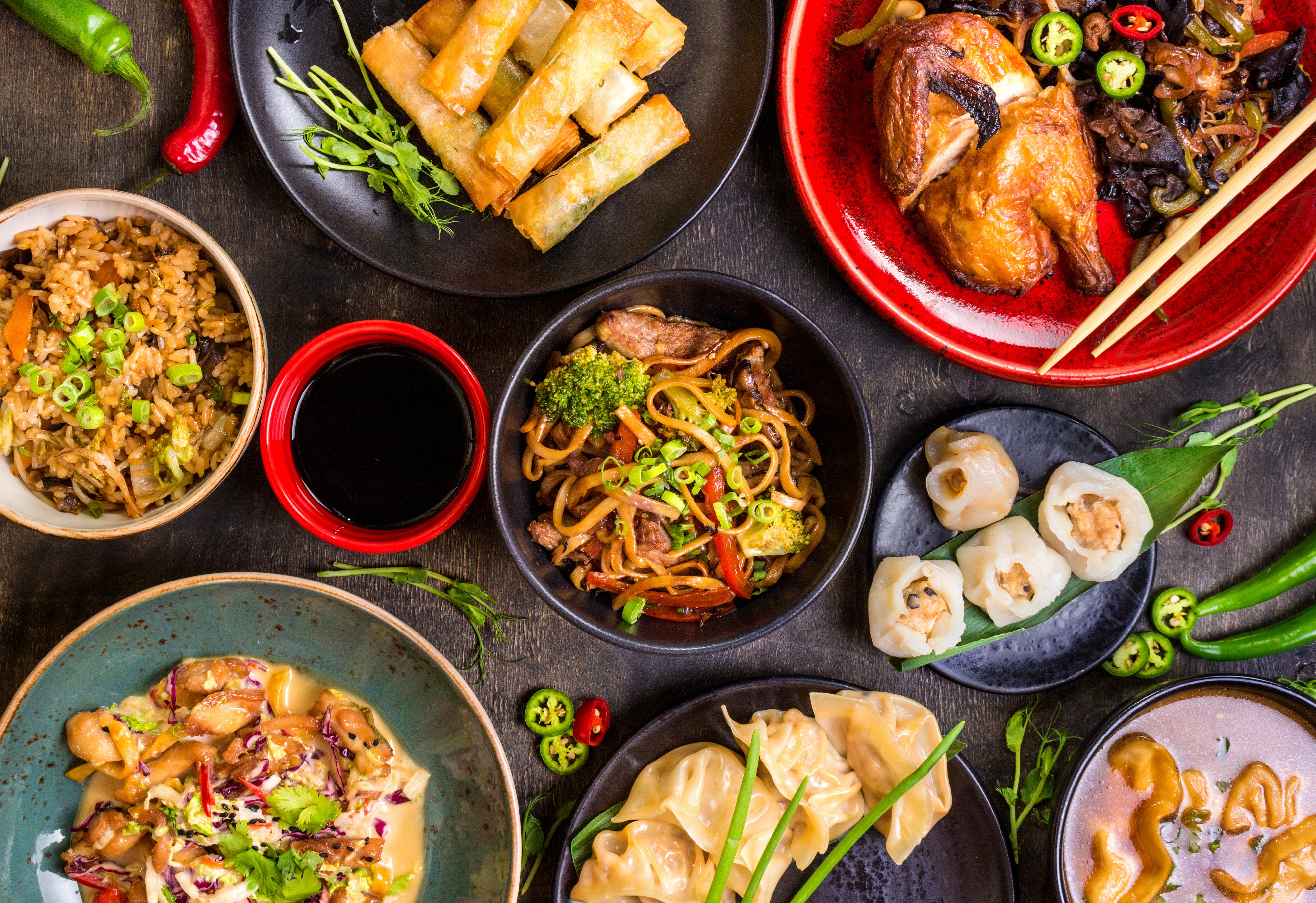